A DESIGN THAT WAS WAY AHEAD OF ITS TIME‍

At its appearance in 1934 the Bf108 was considered a sensation and the test pilot proclaimed it the finest aircraft of its type that he had flown. Internationally it was recognised as being of very advanced design, of all metal stressed skin construction, having retractable undercarriage, flaps and Handley Page leading edge slats. The first aircraft was fitted with a 160hp Siemens radial engine, the remaining five of the initial batch had either the Hirth HM8U of 225hp or the 210HP Argus As17. The first flight was in the Spring of 1934.

This particular aircraft saw extensive service during the war and is understood to have been shot down twice before being captured in Belgium in 1945. It flew on the Belgian register as OO-NET for a time, then found its way to the USA. It was subsequently re-engined at the Piper facility with a Lycoming 10-540 of 300hp driving a Harzell, three bladed, fully feathering constant speed propeller. Additional work was carried out to provide a greater resemblance to its Bf109 fighter sibling, with a modified canopy and cowlings, and the installation of gas-powered guns. It was subsequently sold to South Africa where it operated for a while before moving to New Zealand in 1994. Its owner has enjoyed over a quarter of a century of touring in an aircraft that has provided fast, reliable and comfortable commuting as well as the privilege and excitement of participating in combat sequences at airshows which also paid helpful appearance fees.

The 108 is relatively small for a four place aircraft. The wings can be unlatched at the wing root and folded back to make for easy storage. The Handley Page slats look very thin and flimsy but obviously do the job that they were designed for. The undercarriage was of typical Messerschmitt design being of narrow track and slightly splayed out. In fact the only vice noted in the flight manual was a caution for operating in crosswind conditions.

The cockpit is snug for someone of my size and the leg position is almost parallel with the cockpit floor. However it will seat four people quite comfortably. There is only one throttle quadrant, and this is on the port side making dual instruction a bit challenging.

The undercarriage is raised and lowered by rotating a twist grip and pumping the gear up and down (many, many strokes). The gear position indicator is a sliding pin located between the two front seats. Flaps and elevator trim are chain driven and operated by two large wheels on the port cockpit wall. Starting the engine cold is quite straightforward but not so easy when it is hot. A major trap is that the Magneto switches and the battery master operate in the reverse sense to most modern types and it is a trap for the unwary.

The toe operated brakes are very effective and taxying the aircraft in light wind conditions is no problem. It does have a strong tendency to weathercock into wind in anything over 10-15 knots. Forward visibility is not good and the aircraft must be weaved from side to side. During take-off at light weights the 108 accelerates quite quickly and even with the wind down the runway full right rudder is required to keep the aircraft straight. With a crosswind some right brake is also needed which tends to increase the take off roll.

The 108 flies at around 65 KIAS at medium weights and then you work like a one armed paper hanger for a minute or so whilst you retract the gear and wind in the flaps, re-trim and reduce power. If you can get someone to occupy the right hand seat and retract the gear it makes life a lot easier.

Once airborne however the 108 is a delight to fly. Speeds equate to those of the Harvard but the controls are much lighter and the ailerons are a dream. The Taifun is fully aerobatic and can be flown quite tightly without fear of stalling thanks to the automatic slats. Stall speeds are 58 knots clean and 46 knots with flap and undercarriage extended. The stall is very gentle and is only noticeable by an increase in the rate of descent. Recovery is quite straightforward. The fuel system is somewhat different with five tanks for a total of 52 US gallons which gives a range of approximately 650nm. The indicator is a float on the starboard fuselage wall which is very difficult to see, so it is prudent to know how much fuel you are using and the time that you have been airborne.

The circuit pattern is flown at around 95 knots which is also gear and flap limit speed. Once again the workload is quite high, monitoring power, watching for traffic, pumping the gear down and winding out some flap. However once all that is done the rest of the approach is quite stable. A minor concern is the tendency for the flaps to blow back above 70 knots which on occasions means you are still winding out the flap in the flare. The 108 is very easy to three-point but once on the ground needs care to keep it straight.

The crab technique is recommended for crosswind landings. The 'Taifun' is a delightful aircraft to fly and very advanced for its day. When one looks at some of the current aircraft use for training, we have not come very far since the 108. The aircraft will reach VNE of 190 knots with cruise power set in a shallow dive.  A 2 1/2 G turn can be sustained at 80 knots also at cruise power without any tendency to stall. At 3200 lbs AUW the aircraft requires 1400 ft to clear a 50 ft obstacle and can be landed in 750 ft. Rate of climb at MAUW is in the vicinity of 1000 fpm.

In short the Bf108 `Taifun' is a fun aeroplane to fly, very versatile with no vices. 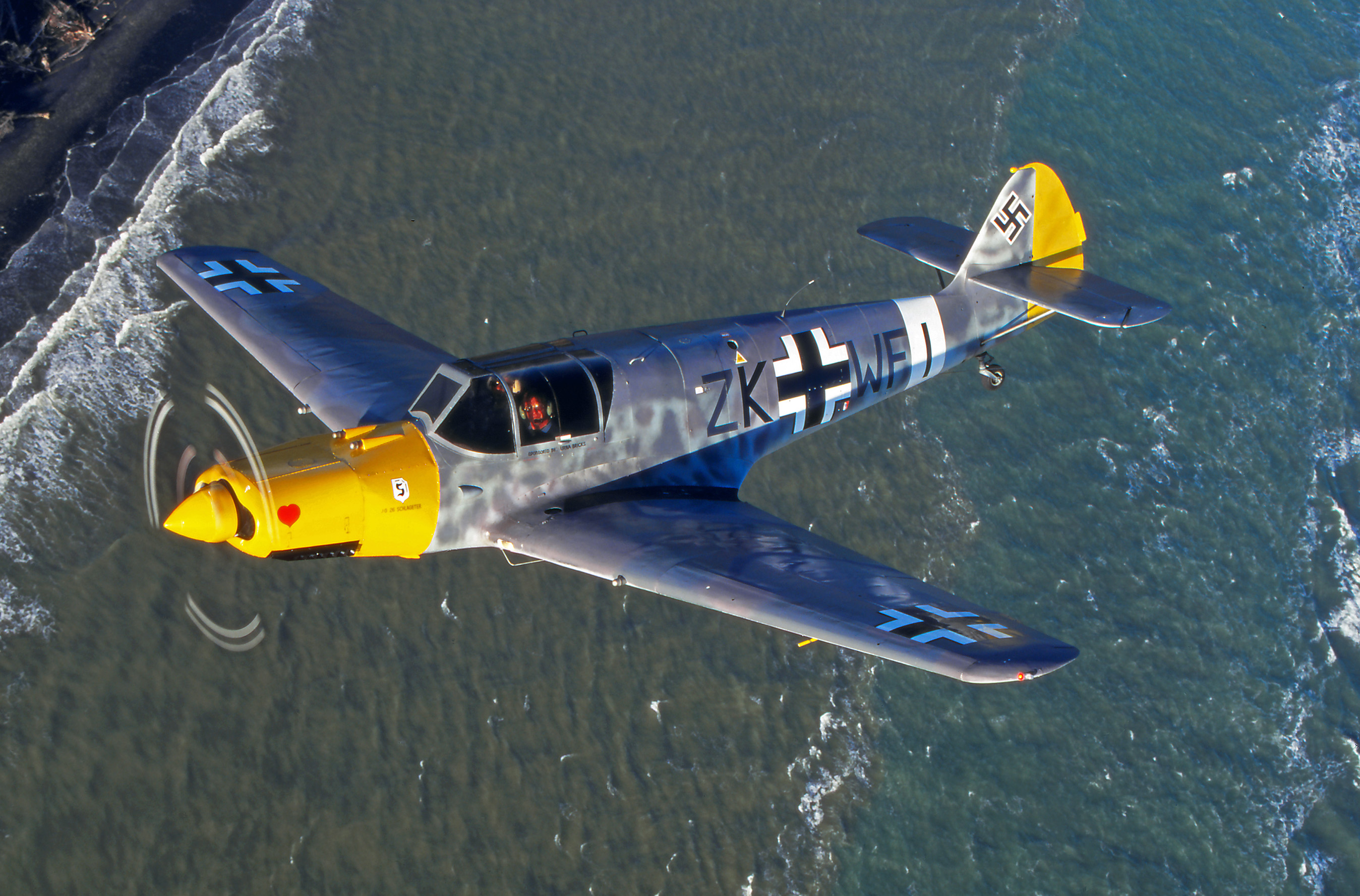